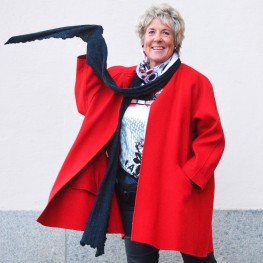 Catharina Ingelman-Sundberg (1948) is a Swedish author and journalist. Having studied history and archaeology, specializing in marine archaeology, Ingelman-Sundberg became known with her books on Viking culture. In her fiction work, the series about Martha Andersson and her pensioner friends, who take on a fair share of mad adventures, stands out. Her novel The Little Old Lady Who Broke All the Rules was published last year in Estonia, describing how a group of retirement home residents, led by Martha, attempt to commit a Robin Hood style crime, to go to prison where they expect better treatment than what they have to bear in the retirement home. More than 300.000 copies of Ingelman-Sundberg’s books have been sold in Sweden alone. Catharina Ingelman-Sundberg will give a talk at the Estonian Writers’ Union on Sunday, 31 May at 2 pm, joined by publisher and translator Tauno Vahter.