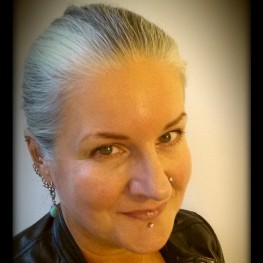 Joolz Denby (1955) is a British poet, novelist, and artist who became known as a punk poet, and continues to be a popular performing poet. She often performs at great music festivals, not to mention international literary festivals, and has worked with several rock musicians like Jah Wobble and the lead singer of New Model Army, Justin Sullivan. Also, the majority of the record covers of New Model Army are made by Denby. Denby rose to prominence as a prose writer with her debut novel Stone Baby (2000). Her Orange Prize shortlisted novel Billie Morgan (2005) leads the readers to the ominous subculture of bike gangs, described by Denby in a realist key, without demonizing or idealizing. Mik Davis is a singer and musician who released the record The Black Dahlia with Joolz Denby in 2012. Denby and Davis will perform at the festival together on Saturday, 30 May at 4 pm in Kloostri Ait.