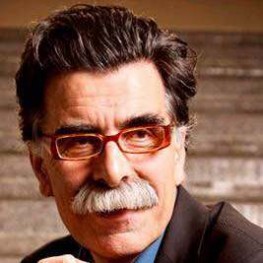 Kader Abdolah (1954), born Hossein Sadjadi Ghaemmaghami Farahani, is an Iranian-born Dutch prose writer, poet and columnist. He left his native country as a political exile in 1985 and reached the Netherlands three years later. His pseudonym consists of the first names of two of his friends who were executed. Abdolah published his first collection of short stories in Dutch, entitled De adelaars, in 1993, and it was named the best-selling debut. A real breakthrough for Abdolah came in 2005 with the novel Het huis van de moskee, which has even been named one of the best Dutch novels of all time. The novel describes the life of an Iranian family in the 1979 revolution and under the rule of Ayatollah Khomeini, delving into the tensions between traditions and the Western culture. In 2008, Abdolah published an alternative translation of the Quran, to emphasize the moderate and humanist side of Islam. Abdolah will talk about his work and world affairs on Saturday, 30 May at 5 pm in Kloostri Ait, where he will be interviewed by poet and critic Igor Kotjuh.