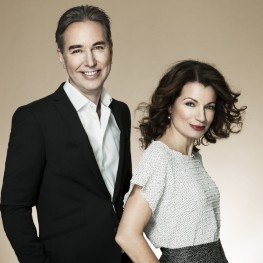 The pseudonym Lars Kepler actually unites two writers – the married couple Alexander Ahndoril (1967) and Alexandra Coelho Ahndoril (1966). The first part of their pseudonym refers to Stieg Larsson and the second part to German scientist Johannes Kepler. Already their first crime novel published as Lars Kepler – The Hypnotist (2009) – became an international bestseller. The book focuses on the psychiatrist and therapist Erik Maria Bark, who specializes in severe traumas and who has studied the effects of hypnosis on patients. Characteristic of Scandinavian crime novels, an exciting and haunting plot unfolds, with intertwining social and psychological pressures. Like any proper Scandinavian crime thriller hero, Bark, too, suffers under several psychological problems. The Finnish-Swedish Detective Inspector Joona Linna introduced in The Hypnotist will go on to solve crimes in the consecutive novels The Nightmare, The Fire Witness and the Sandman. You can meet Lars Kepler on Friday, 29 May at 2 pm at the Estonian Writers’ Union, where they will be joined by translator Heidi Saar.