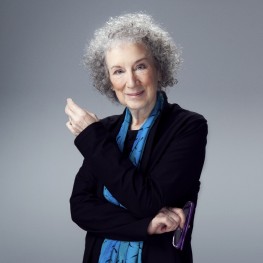 Margaret Atwood (1939) is a Canadian poet, novelist and essayist, one of the best known and recognized Canadian authors. Just as it is difficult to list all of her achievements, it is also almost impossible to give a concise overview of her imaginative oeuvre, which takes its subject matter from mythology, history, the present day and the future. Several of her books have been filed under science fiction and her 1985 novel The Handmaid’s Tale, a dystopia about the United States that have morphed into the Republic of Gilead, was awarded the Arthur C. Clarke Award in 1987. Actually, a whopping 15 books by Atwood have been published in Estonia, both prose as well as poetry. These include the novel Blind Assassin (2000), which skilfully combines a love story, a mystery and a literary game and which won the Booker Prize (in total, five of Atwood’s books have been nominated). Oryx and Crake, published in 2003, is another example of Atwood’s talent for bringing together an imaginative plot and social nerve, taking the readers to a post-apocalyptic world full of strange creatures. Atwood’s poetry can be read in a selection of poetry published in 2003. Margaret Atwood will talk to film director and writer Ilmar Taska on Sunday, 31 May at 5 pm at the Estonian Writers’ Union.