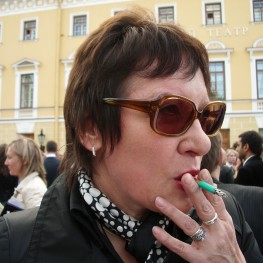 The Soviet Union has not left the world with too many wonderful things. However, one of them was born as a counter-reaction to the the Soviet fake pathos and formality that was divorced from reality – namely, a great amount of literature with a sobering and often ironic look, which tried to offer people the feeling that they are not alone in that gap between reality and what is perceived. Marusia Klimova (1961) and her works stand right in the middle of this grandiose and restless stream. Estonian readers can read her novel Blue Blood, which looks at the end of the Soviet Union, when the society was undergoing Perestroika at flash speed, but despite the political shifts, the gap between reality and official rhetoric is still clearly felt. Klimova herself has described it as follows: ‘Real life, however, was hidden behind television, newspapers and ‘scoops’, and slipped even further away than during the Soviet period’. Blue Blood tries to grasp a piece of that feverish, bordering on insane, life in the final agony of a social order, in a city that has born the name of both Peter I as well as Lenin. Marusia Klimova will talk about Blue Blood and her work at the Estonian Writers’ Union on Thursday, 28 May at 5 pm and she will be joined by translator Ilona Martson.