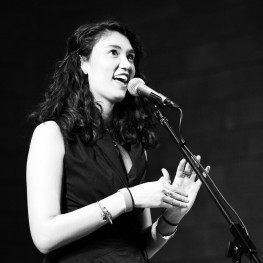 Sarah Kay (1988) is an American poet from New York, mostly known as a spoken word poet. In 2004, when the first Poetry Slam was held in Estonia, Kay became the co-founder of Project V.O.I.C.E. that aims to use spoken word poetry for educational and inspirational purposes. Kay began performing poetry already at 14 and is now an eagerly anticipated guest at poetry slams. In 2007, Kay made her television debut, making an appearance on the HBO show Def Poetry, which was headed by the famous rapper Mos Def. Kay has even performed at the UN. Although mostly known as a performer, Kay’s work has also been published in several magazines and in 2011 she published the book B, containing a single poem. She received a standing ovation at the presentation of this heartfelt work, connecting generations, at the TED talk in Long Beach. Last year, Kay published the book No Matter the Wreckage, which brings together her work from the first dozen years of her career. Sarah Kay will perform on Friday, 29 May at 6 pm at the Estonian Writers’ Union.