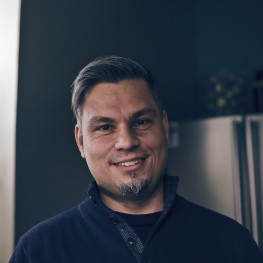 Tommi Kinnunen (1973) is a writer and teacher of Finnish and literature, living in Turku. His first novel Where Four Roads Meet (2014) is considered one of the most remarkable prose debuts in Finland in recent years. The novel was nominated for the best debut prize of the daily Helsingin Sanomat and the Finlandia Prize and its enormous success is evidenced by the fact the publishing rights have already been sold to 14 countries. Where Four Roads Meet will also be published in Estonian by the time of the festival HeadRead (translated by Jan Kaus). Kinnunen’s novel looks at the fate of a family living in northern Finland through the upheavals and changes of the 20th century. The people have to survive in a rough terrain, where little grows, apart from conifers and a conservative attitude. Kinnunen skillfully describes the social and psychological tensions of people living in that environment – the wish to remain true to one’s inner voice soon brings insurmountable difficulties in trying to make that voice heard and share it with others. People try to build shared walls, floors and roofs around their lives and dreams, but eventually the house is full of wrong choices and and misunderstood or unspoken words. Yet the house stands and waits for warmer times.