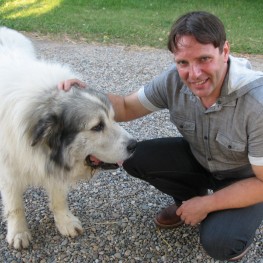 Edward van de Vendel (1964) is a Dutch children’s and young adult writer. His breakthrough came in 1999, when he published Gijsbrecht, a new version of a play by the 17th century poet Joost van den Vondel. Initially, the play that is set in 13th century Amsterdam and borrows from the Iliad and Aeneid does not seem like suitable reading for children but it won the prestigious Gouden Zoen prize. This year, van de Vendel made his Estonian debut, when his touching story Dog Named Sam, considered one of his best works, was published in Estonian. It is based on a true story – when the writer visited his brother’s family in Canada, a great white dog appeared at their place. The adventure they had with the dog was made into a book. Van de Vendel calls Sam a ‘fairy tale dog who actually exists’. Edward van de Vendel will talk about Sam and much more at the Estonian Children’s Literature Centre on Friday, 29 May at 2 pm.