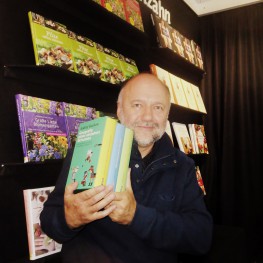 Andrey Kurkov (1961) is a Ukrainian novelist and journalist writing in Russian, one of the best known Ukrainian authors today, and his works have been translated into more than 30 languages. He has written fiction and non-fiction, as well as children’s books and television scripts. His best known work is Death and the Penguin, a grotesque and realist novel about Kiev in the throes of post-Soviet chaos. The book centres on the relationship between a man who is writing obituaries for people still living and a penguin he acquired after the Kiev Zoo closed. This juxtaposition is typical Kurkov – if there is such a thing as existential humour, Kurkov is its fitting representative. He takes his inspiration from the collapse of the communist empire and its fallout, following events with black humour as well as a certain sadness. Two years ago, Kurkov’s autobiographical book Ukraine Diary: Dispatches from Kiev was published in English and Estonian – a personal story from the heart of the dramatic events.