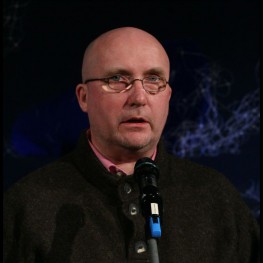 Carl Jóhan Jensen (1957) is a Faroese prose writer, poet and critic. Jensen has served two terms as the president of the Faroese Writers’ Union and he is also active in the archipelago’s political and cultural debates. When Iceland was the main guest of the Frankfurt Book Fair in 2011, ten Faroese writers were also invited and of course they included Jensen. His books have been nominated for the biggest Scandinavian literary prize – the Nordic Council Literature Prize – on four occasions. His best known work, the novel Ó – søgur um djevelskap (Un-tales of Devilry) published in 2005 has been translated into several languages, including English. Jensen has also twice been awarded the most important Faroese literary prize, the MA Jacobsen literary prize.