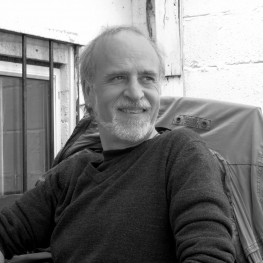 Dave Hutchinson (1960) is an English author. He began writing early; his debut collection of short stories titled Thumbprints was published already in 1978. Three more collections of stories followed and after that Hutchinson stopped writing fiction for a long time. Following a career in journalism, Hutchinson returned to fiction in 2001 as an author of sci-fi novels. In 2014, Hutchinson’s multi-layered novel Europe in Autumn was published, and it features an Estonian protagonist named Rudi. Rudi works as a cook in a restaurant in Krakow, but as fate (or the author) has it, he becomes a mix between a spy and a trafficker, smuggling people and goods across the borders of a fragmented Europe via an underground courier organisation. Hutchinson’s novel has the elements of both a crime novel and a dystopia – the action takes place in a situation where there are only four states left in the European Union and on a continent devastated by an economic crisis and a flu pandemic, new polities are cropping up like poisonous mushrooms after acid rain.