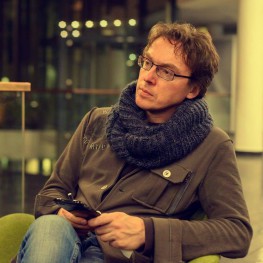 Dmitry Vodennikov (1968) is a Russian poet and essayist who was voted among the best ten living Russian poets in 2002 by Russian poets and critics. Vodennikov has published seven collections and he is considered quite an innovator, a leading author of New Sincerity in Russia. In addition to writing poetry, Vodennikov also heads two poetry programmes on the radio and is known as a brilliant performer, whose colourful and media-savvy personality resonates with more than just the literary field. In 2007, Vodennikov was crowned the king of poets at the Moscow Polytechnic Museum. This event restored a historic tradition – the last poet was crowned in this building in 1918, when Igor Severyanin snatched the title from under Vladimir Mayakovsky’s nose, and it sparked a wider polemic on the essence of poetry and in the centre of it all was Vodennikov with his outspoken poems about life, love and loneliness. His work and creative principles are available on his website www.vodennikov.ru.