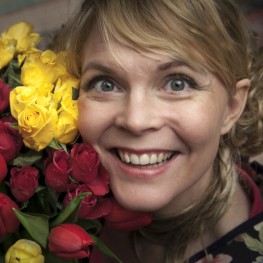 Heli Laaksonen (1972) is a Finnish poet writing in southwestern Finnish dialect. As a wonderful performer, Laaksonen has succeeded in promoting fiction written in dialect, and her popularity in her native Finland is nothing short of enormous. Allegedly, Laaksonen was inspired by south-eastern Estonian poets at the beginning of her creative journey, she has worked with Jan Rahman who writes in the Võro dialect and they published the joint collection of poetry Maapuupäiv in 2000. Laaksonen’s fiction debut Pulu uis (2000) became a national phenomenon. Her record of poetry Jänis pussis, released in 2003, sold 15,000 copies in a year, becoming a gold record by Christmas 2006. Laaksonen’s poetry is characterised by the poeticisation of the everyday and she strikes a balance between affectionate and ironic. You can find out more about her work and the southwestern Finnish dialect on the website www.hulimaa.fi.