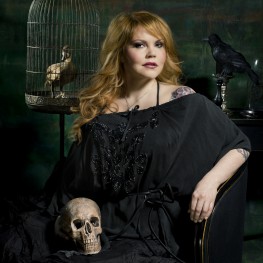 Katja Kettu (1978) is a Finnish writer and columnist. With her most successful novel to date, The Midwife (Kätilö, 2011), Kettu is a perfect representative of that rising generation of Finnish authors, born in the 1970s and 1980s, who have been inspired by recent history. In Estonia, a particularly lively response was generated by Kettu’s novel The Welder (2008), because its plot is related to the Estonia ferry disaster – the title refers to a man involved in the welding of the ship’s bow visor who becomes riddled with guilt after the disaster. Her novel Hawk Moth was also recently published in Estonian. Kettu creates an evocative atmosphere in her novels with some haunting blunt naturalism amid the harsh setting of Lapland, but also through the polyphony of voices.

Incidentally, Katja Kettu’s life choices have repeatedly been influenced by the grand old man of Estonian animation Priit Pärn. First, inspired by Pärn’s work, Kettu went to Turku Arts Academy to study animation. Kettu met Pärn, who discovered her talent for writing and sent her script to his friend, the renowned prose writer Kari Hotakainen. The rest is history, but the story itself is too good to be literature.

Trailer of the film Midwife (with English subtitles)