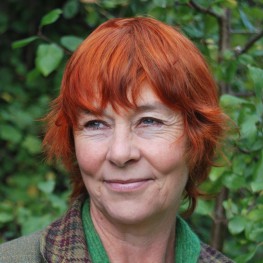 Margot Henderson is a Scottish-Irish storyteller. In her work, she cherishes the natural environment and sense of community, but also openness and responsibility in a society – according to her, creative work is linked to the increasing of social welfare. Henderson loves working with people of different ages, abilities and cultural backgrounds. She has taken poetry and stories to schools, hospitals, day centres, homeless shelters and prisons. Since a sense of place is very important for Henderson, her work is often directly linked to the places where she performs – be it a theatre hall, a museum, a grove or abbey ruins. Henderson’s storytelling can simply be described as that of a sharer and creator – she draws on local, but also Native American and African heritage, and creates new stories of her own. Henderson also binds poetry and stories with music, dancing and singing.