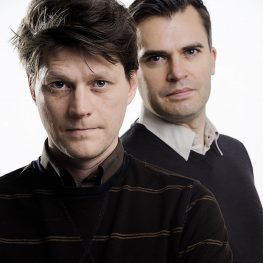 The pseudonym Michael Mortimer denotes the literary duo Daniel Sjölin (1977) and Jerker Virdborg (1971). Both have also gained recognition in their own right. Daniel Sjölin’s novel Världens sista roman (The Last Novel in the World, 2007) was nominated for Sweden’s prestigious August Prize, and he has also gained prominence as a critic and presenter of the literary television programme Babel. Jerker Virdborg has written five novels, which have won a number of awards in Sweden; his debut Svarta krabba (The Black Crab) caused a stir, with a dark dystopian undercurrent not unlike the worlds created by Michael Mortimer. Mortimer’s first book Maidenstone and its sequel Escape from Paradise and its sequels Escape from Paradise and The Sisters of Blood are fantastical science fiction novels. The events are set off by mysterious stones found by a Swedish scientist in New Zealand in mid-18th century, which have been held, among others, by Goethe and Stalin. One of the stones ends up in the hands of a student called Ida Nordlund, who will be thrown into wild adventures involving charges of murder, escape, lost secrets, strange wolves and even stranger seagulls. You can be a part of Michael Mortimer’s flight of fancy on Saturday, 28 May at 2 pm at the Estonian Writers’ Union.