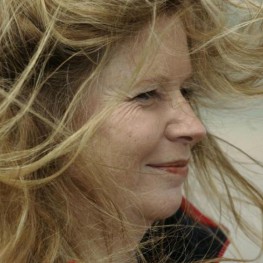 Nuala Ní Dhomhnaill (1952) is a UK-born Irish poet, one of the best known poets writing in Irish. Her first collection of poems An Dealg Droighin was published in 1981. Although Ní Dhomhnaill has grown up in a bilingual environment and many of her books have also been published in English, she writes only in Irish on principle. She describes this decision in one of her best known poem ‘The Language Issue’. Therefore, it is not surprising that Ní Dhomhnaill’s poetry focuses on the rich Irish folklore and mythology, which the author considers the foundation of the Irish sensibility and character. She intertwines traditional motifs with more contemporary issues like femininity, sexuality and culture. In addition to poetry Ní Dhomhnaill has also published children’s plays, scripts, articles and essays – she is a marvellous storyteller in the guise of a poet. Ní Dhomhnaill’s poems have been translated into Estonian by Doris Kareva in the collection Roġha Danta: seitse iiri luuletari.