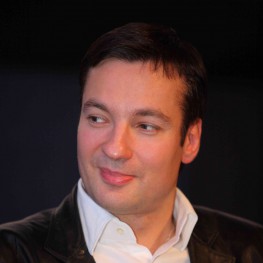 Pavel Sanayev (1969) is a Russian author, actor, film director and screenwriter. Estonian readers know him thanks to his cult work Bury Me Behind the Baseboard (1996). With a generous dose of black humour, this book tells about life in Moscow in the 1980s, focusing on the relationship of an unhappy boy missing his mother and his overbearing, embittered grandmother, a grotesque treatment of diseases. The autobiographical background of the work caused quite a stir – Sanayev’s grandmother Lidya Sanayeva is a famous documentary filmmaker and his grandfather Vsevolod Sanayev was a famous actor, and so is their daughter, the author’s mother Yelena Sanayeva, who is known for the role of Lisa Alisa in the film Adventures of Buratino and whose husband, in turn, was Rolan Bykov, the man who gave Estonians the unforgettable Brother Johannes in the cult film The Last Relic. However, even without these personal associations, Sanayev’s book creates a truly suggestive insight into psychopathic love. The book was made into a film in 2009 (directed by Sergey Snezhkin).