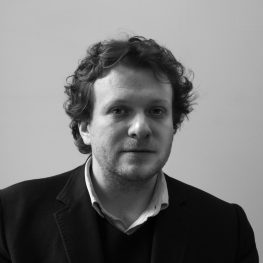 Peter Pomerantsev is a British journalist and broadcaster, born in the UK to Russian émigré parents. Pomerantsev’s autobiographical account Nothing Is True and Everything Is Possible: The Surreal Heart of the New Russia (2014) describes his experiences working in Russian journalism and television, where he spent nearly ten years. Thanks to the opportunity to see the media machine of Putin’s Russia from the inside, the author began to view the turbulent Russian society with a restless history as a great masquerade, where what was absurd yesterday is fact today. The Kremlin’s aggressive nationalist policy of fake splendour is directly linked to the fact that the sense of reality of the majority of the country’s population is becoming more and more distorted. This has made it entirely possible, for example, that a gangster with an artistic disposition wishes for better crime series and hires his own people as actors for that purpose. He will not bother with the script, fake blood or fake bullets – everything you see on the screen is real. In addition, the staff of the local TV station must be threatened, so the series is actually broadcast and becomes an enormous success. At the same time, the state system is harassing honest entrepreneurs. This and much more on the mental state of current Russia will be discussed by Pomerantsev and the President of the Republic of Estonia Toomas Hendrik Ilves.