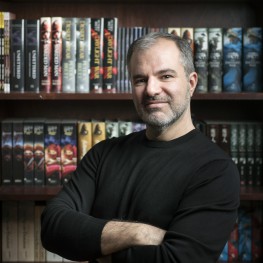 Peter V. Brett (1973) is a New York based American science fiction author, whose appearance at the festival is wonderful news for all sci-fi enthusiasts, and also those who like novel series. Brett won recognition with his Demon Cycle, the first novel of which, The Painted Man (2008) was supposedly written on the New York City subway. The Demon Cycle is a futuristic fantasy, in which a once technologically advanced society has been reduced to isolated village communities ruled by demons known as ‘corelings’. During the night, people have to hide from the demons by sealing their doors and using different magical signs, otherwise they will be killed. There are various kinds of demons associated with different elements – water, fire, trees, sand etc – and each species have their own horrifying characteristics. Naturally, this kind of a story is unthinkable without hope, borne through the legend of a saviour who will unite people, and whose arrival is eagerly anticipated. In addition to The Painted Man, two more books from the cycle are available in Estonian – The Desert Spear (2010) and the Daylight War (2013).